How To Use VO2 Max, In Running

I guess that lots of you have stumbled across V02 Max testing before, but not many of you will have experienced one before.

V02 Max testing is one of the most common tests performed to determine the maximal amount of oxygen uptake or consumption a person can consume in one minute. Results from this test are taken and used to establish a baseline level of fitness and determine training zones. This allows athletes and coaches to get the most out of their sessions and is an excellent way of tracking and monitoring progress.

How is the test performed?

V02 Max test is commonly performed in a sports performance lab by a trained sports professional – like a sports scientist. A treadmill or stationary bike is frequently used, and you will be fitted with a face mask that is connected to a special machine that will measure your exhaled gases when you breath, under exercise conditions. This equipment analyses your respiratory rate and volume alongside oxygen concentration and carbon dioxide (inhaled and emitted air). You will also be given a heart monitor to strap around your chest to monitor heart rate throughout.

You will begin with a warm-up for around 15-20 minutes, depending on how much you want to warm up. Once ready to go, you will start by running a series of 3-minute runs, which will increase in pace (speed) every minute to determine a lactic profile and threshold.  Once lactate concentration reaches 4mmol or increases by 50% this part of the test is completed. The point at which this occurs defines the speed of which the second stage of the test will be set at, and it is this part of the test which determines V02 max scores.  Following each 3-minute effort, runners are shown a Borg scale which rates perceived exhaustion. The athlete is asked to perceive their own level of fatigue.

After 10-15 minutes of recovery, the second stage of the test should begin. During this stage, a mask and heart rate monitor are worn once again. However, this time, the athlete is required to run at speed determined by the first stage of the test (when 4mmol lactate has been recorded) in 1-minute increments. After every 60 seconds, the treadmill incline increases by 1%. After each minute the athlete is once again shown a Borg scale and asked to rate perceived fatigue again. Only when the athlete has reached overall exhaustion, is the test completed. You will then be given a test score and a written report to explain the results of the test. This type of data is extremely important for both the athlete and coach to determine training metrics and fitness levels. The training may be adjusted depending on the test outcome.

These scores can improve with training but may be limited by certain factors. There are a number of factors that will affect VO2 max scores:

Despite many factors affecting V02, it is a great tool to enhance your training and running performance. If you are someone who is looking to improve and is serious about training, taking this test will undoubtedly provide you with the information you need to do this.

Testing Procedures: blood samples for [La] were taken every 3 minutes during incremental running exercise to ascertain LT and LTP. Finally, after a 10-minute recovery period, a test was administered, which started at 2 km/h below the final speed sustained during the lactate test and comprised 1% gradient increments every min until volitional exhaustion. This document includes the results of the testing, a simple explanation of what the results mean, your present state of fitness and recommendations for training. All data collected will be treated as highly confidential and will not be available in any form to anyone other than those involved.

Lactate threshold (LT) is the first workload at which there is a sustained increase in blood lactate concentration above baseline levels. This marks the point at which exercise can be performed for a prolonged period (hours) and is really the lower marker for aerobic exercise training. Any work performed below this will be considered to be recovery training.

Lactate Turnpoint (LTP) is the workload at which there is a sudden and sustained secondary increase in blood lactate. The corresponding workload at lactate turnpoint can be held for 20 – 40 minutes and is often useful for predicting performance up to 10 km.

I have presented the data from the incremental running test in table and graph format below.

It has been estimated that middle distance running requires the energetic equivalent of 110 %. Therefore, remains an important measure of performance capacity in middle distance running. While, submaximal markers of endurance performance (such as running economy, LT and LTP) can compensate for a relatively poor amongst an elite group of athletes, entry to that group is dependent on you.

The speed was estimated by multiplying yous by 60 and divided by the average economy ascertained from the first 4 stages of the lactate test is useful for predicting performance during 1500 – 3000 m running and is suggested to be the ideal speed.

I have used your lactate data to provide you with some recommended training intensities, which you can use accordingly. The table below provides an outline of some training session types and running speed values that correspond to them. 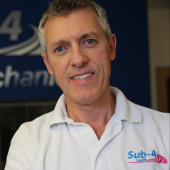 What are Tempo Runs, and How Can They help Me?

How do I do fartlek training? by top coach John Danahay